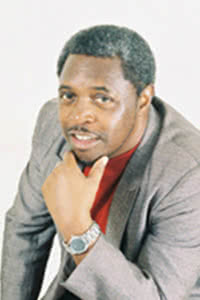 Steve Riddick is truly a natural born entertainer. He has literally been singing his entire life. His forte is explosively soulful renditions of great songs in all genres, that send chills up your spine, and always inspire people to jump out of their seats onto the dance floor. After once hearing Steve featured during a Bo Diddley performance in New York, renowned Seattle music critic Rickey Wright described him as “a real deal authentic soul master”.

Steve began his professional career as the lead vocalist in several elite regional R&B, Pop, and Gospel groups during his early teens, and he has performed throughout the United States and abroad ever since. Steve has shared stages with many of the great innovators and stylists of all time, including Bo Diddley, Jeffrey Osborne and Roberta Flack.

Steve was also featured on jazz legend Roswell Rudd’s “Broad Strokes” CD (available on amazon.com), and his 2009 debut CD release called “Didn’t Hear This Coming” is available on CD Baby at cdbaby.com/cd/skrilla and includes a glorious tribute called “Coretta”, honoring Coretta Scott King, as well as a wide range of contemporary R&B – all written and performed by Steve “Skrilla” Riddick.