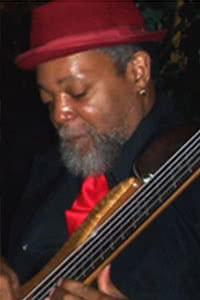 Bill Dotts is second to NONE! His extensive touring schedule with various world renowned acts, including The Harlem Gospel Choir and jazz fusion legend Lonnie Liston Smith, has taken him around the globe to Japan, Russia, Australia, New Zealand, throughout Europe, and across the United States many times.

With The Jon Bates Band, he has also backed up music greats Bo Diddley, Jeffrey Osborne, Roberta Flack, and others, and he has performed for many years with the renowned World Beat Afro-Caribbean group known as “Spirit Ensemble”. Bill is highly regarded by fans and musicians alike for his uniquely solid and distinctive rhythmic style, and his tastefully inherent musical instincts. His only other passion as intense as playing bass is his love of science fiction, but fortunately he is able to devote ample time to both.

Some of the many inspired recordings he has performed on include the soundtrack for Spike Lee’s "Do The Right Thing", "Now That I’ve Got Your Attention" (Lesette Wilson), "Inspirations" (The Spirit of Life Ensemble), and "Broad Strokes" (Roswell Rudd).
Bill Dotts playing with Lonnie Liston Smith in Paris