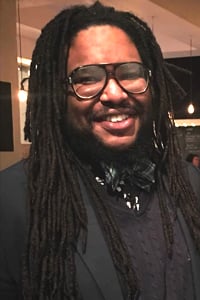 Akie Bermiss - pronounced like "hockey" without the "h" - has emerged over the last decade as a much sought-after musical chameleon across multiple genres. He was born, raised, and still resides in Brooklyn, NY and grew up as one of five kids in a musical household full of jazz and politics, fueled by the vision, intellect, activism and cultural consciousness of his mom and dad.

Akie is an unabashedly self-proclaimed nerd who, since early childhood, has been obsessed with science fiction. He's also a graduate of the very distinguished Brooklyn Technical High School and prestigious Bard College, and the while, has very successfully cultivated a double-life as a thriving musical protégé, pianist, singer/songwriter, composer, arranger and powerful solo artist. Having first sung in church and school, he quickly drew attention far and wide for his awe inspiring vocal stylings and abundant musical gift. He quickly became an in-demand vocalist, and while attending Bard, began seriously studying piano under the auspices of John Esposito, Erica Lindsay, and composers George Tsontakis and Kyle Gann. He became increasingly active in the jazz studies program there and quite naturally, he became a first-call player throughout the region.

With his skill, affable disposition, professorial demeanor and an unwavering work ethic, Akie has become an increasingly prominent first-call musical presence. Since 2017, much of his time has been dominated by a vigorous international touring schedule with the hugely popular indie band "Lake Street Dive". Akie is equally comfortable and adept performing neo-soul, funk, jazz, alternative rock, love songs, ballads, or hip hop, and he's well known for his uniquely raucous, guttural and soulful vocals, best described as a delectable fusion of Donny Hathaway and Tom Waits.

Over the past decade, Akie has become a prominent presence on the very fertile Brooklyn / Lower East Side / Harlem / Hudson Valley music scenes, as the featured leader of "The Akie Bermiss Trio" (Rockwood Records), as a founding member of "Aabaraki" and "The D-Major Project", and frequently performing with an array of wonderful artists, including  "Screaming Headless Torsos", Miri Ben-Ari (the Hip Hop Violinist), Rap sensation "Soul Khan", Natalie Forteza, and many others!

Among other things he is also the author of a children’s book entitled “I Hate to Be Sick” (Scholastic), a cigar aficionado, and takes his bourbon "neat" … oh, and as a final foot note ... if you're ever contemplating charming him with your culinary delights, he absolutely despises cheese, fish, or any sort of creamy sauces!

You can find out more about Akie Bermiss at his website: Akie Bermiss Music
Video below: Akie performing with Lake Street Dive, Live at Red Rocks